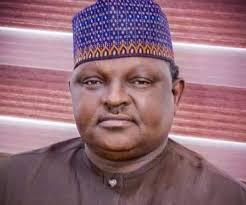 Hamza Al-Mustapha (born 27 July 1960) is a former Nigerian Army major and intelligence officer who served as Chief Security Officer. He enrolled at the Nigerian Defence Academy in Kaduna and was commissioned into the Nigerian Army in 1983.

Al-Mustapha joined the army and was trained as an intelligence operative. He was involved in at least two investigations of coup attempts. He was appointed Chief Security Officer to the Head of State (CSOHS) with a Special Strike Force Unit during Abacha’s military regime (17 November 1993 – 8 June 1998). Other security outfits at the time were the Office of the National Security Adviser under Ismaila Gwarzo, the Directorate of Military Intelligence, the State Security Service and the National Intelligence Agency.

All of these units engaged in extrajudicial killings of people seen as threats to the regime. After being appointed Chief Security Officer, Al-Mustapha established a number of small security outfits recruited from the military and other security organizations and trained in Israel and Korea.